THE NEWS OF THE BYZANTINE SHORT CHRONICLE (MARC. GR. 595) ON SERBIAN MEDIEVAL HISTORY

The Byzantine short chronicle, Marc. Gr. 595, was edited by E. Mioni in 1981, and it wasn't, thus, incorporated in P. Schreiner's critical edition of Byzantine short chronicles. Its news were, therefore, only partially used in several modern works (such are Prosopographisches Lexikon der Palaiologenzeit, 9. faszikel, Wien 1989 and Р. Радић, Време Јована V Палеолога (1332-1391), Београд 1993). But those ones, dedicated to the Serbian medieval history, stayed fully unknown in the modern Serbian historiography. One of them, eventually, as far as it is known, is not mentioned in any other contemporary source, but this particular chronicle. It is the news which testify that Jelena Dragaš, the only Byzantine empress of the Serbian origin, came to Constantinople in December 1391. Previously, it was considered that she arrived in the Byzantine capital a few days prior to her wedding to the emperor Manuel II, which took place in 11. February 1392. Consequently, this news arises the problem whether the above mentioned date was the one in which the wedding ceremony and the coronation ceremony both took place. It appears that this news strenghtens the attitude of G. P. Majeska, Russian Travelers to Constantinople in the Fourteenth and Fifteenth Century, Washington 1984, 417-418 that the wedding ceremony occurred separately, before the coronation one. It also seems that the news of the chronicle, which mentions the death of Jelena Dragaš, in 1450, as "h` dia. tou/ qei,ou kai. avggelikou/ sch,matoj metonomasqei/sa ~Upomonh. monach." insinuates that she bore the mega schema or "greater habit", i.e. the highest level of monastic profession. At least, it urges further researches in order to bring together numerous contradictory sources referring to the problem of mikron schema and mega schema. The other news of the chronicle, concerning Serbian medieval history, are recorded in other sources, in the Byzantine as well as in the Serbian ones, but thus confirmed, all of them suggest remarkable acquaintance of medieval men's impressions, experiences and, finally, fate throughout the Balkans. 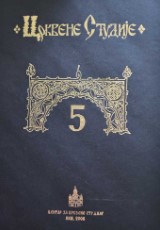